Over the past two years, my  husband and I did create cute and healthy meals for our kids (which I might post about later).  In general, our children's daycare lunches were simple containers of food due to the fact that their meals were removed from their containers, placed on a plate, and warmed, except for the batman shaped pizzas my hubby made for them on Pizza Tuesdays.  With my son starting Kindergarten, I plan on packing more of his lunches now.  My bento skills will be put to use!


Here is his lunch and snack for his first full day at Kindergarten. 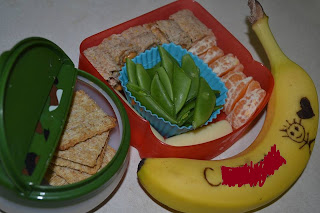 I'm concerned it's not enough food, but I'll find out when he comes home.  What I tried to keep in mind while packing his food for the day:
I let him see his food last night, just so I could be sure he would be happy with the contents.  He was very pleased and was asking if he could eat parts of it right then!  But, again, I'll see how well it went over when he gets home and I can see what he didn't eat.
Posted by MankyCat at 3:12 PM No comments: Links to this post

Time has been short of late.  My husband and I are trying out some changes to our family's life.  One change is that our weekly menus are following a theme per day:  Pancake Sunday, Meatless Monday, Yummy Tummy Tuesday, Wokking Wednesday, Tex-Mex Thursday, Pizza Friday, and Grammie's Saturday.  Pizza Friday is actually going to become something else though.
We've also been buying produce, meat, eggs, and some dairy at local farms and local farmers markets.  We buy certain essentials at the grocery store, but our trips there are far fewer and much more controlled.  We are also eating healthier and adding more beans to our diets to compensate for the proteins we used to get from meat.  (We've reduced our meat consumption by well over 50%, and we weren't even eating much meat before!)  Last week, we only bought a small pack of ground beef from the local dairy farm and 2 chicken leg quarters from a poultry farmer at the farmers market and that did us well in the way of animal protein for our week's menu!
Another change is that my mother and I have started a Health and Fitness blog together in an attempt to live healthier lives.  This has benefited us in many ways and is actually part of what finally got me to stop thinking about buying local food, and actually start doing it!  My mother has had amazing results with her own endeavors and I'm excessively proud of her!

So here's a post to "Catch Up" on the bentos I've made and ate (that I actually took pictures of).

﻿Yesterday's bento was very tasty.  I didn't eat the fruit for my snack, but did eat the yogurt.  I loved how the salad stuffed raw peppers turned out and will be doing that again.  I was able to eat them with my hands with no mess, which is always an added bonus on busy days.  Even the smoked sausage filled mushrooms were good too, but really, the peppers were fantastic.
Lunch Bento:
4 mushroom caps w/ 1 Hillshire Farms Lit'l Smokies beef sausage (cut into 4 pieces, inserted into mushroom caps)
3 Hillshire Farms Lit'l Smokies beef sausages (uncut)
1 salad stuffed green pepper (cut in half and stuffed with leftover salad mixed with grated sharp cheddar and bacon-ranch dressing)
3/4 tomato cut into wedges

Orange
Posted by MankyCat at 7:19 PM No comments: Links to this post

As my previous post mentioned, I am trying to rekindle my interest in eating by cooking foods I tended to enjoy making (and consuming) at my previous apartment.  So... without further ado...
Dinner:  Bibimbap﻿ 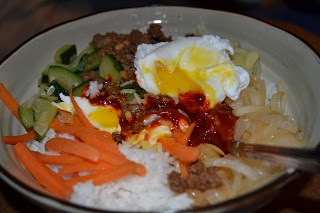 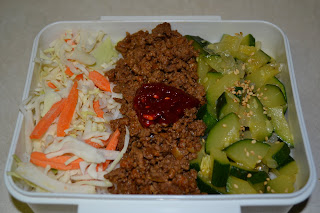 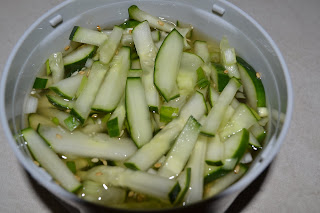 It's been a while, yet again, since I've posted my bento meals here.  Many apologies.  We moved in March, so a lot was and still is packed in boxes.  We had to find our cameras and are still missing the wires for one of them (our better one, at the time).  I did take a few pictures of meals over the past month or two, both bento meals and cute foods.  I hope to share them soon.

However, I finally broke down and bought a nice DSL camera.  I'm totally and completely in love with it!  Finally, I can start getting the types of photos I want!  I tend to have a strong love for macro images, so it's nice hanging a camera that can really handle them to the level I desire.

Anyways, here are the first bento images I took with this camera.  It was a rush job, just before work, taking just enough time to wipe down the counter.  :-p 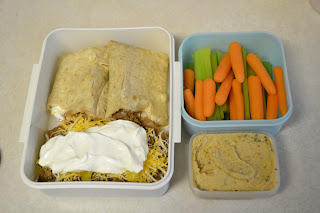 I'm really trying to get back into bentoing, if for no other reason than to make sure I eat enough at work.  Since my move, I would grab a cup of coffee and maybe a string cheese.  I may or may not take a lunch, and if I took one, I may not eat one.  I did grab some hummus and a bag of 'baby' carrots to be my lunch for a week, but that didn't settle well for every day as it hurt my stomach.  I also had packets of oatmeal that I also picked up.  Some days, I would just have tiny pickles with GF crackers and peanut butter.  These aren't the worst things to eat, but definitely not the best especially when it was all I'd have for a full day at the office.  Combine that with several cups of coffee... just not good.  Usually, I'd end up noshing on anything I could the moment I'd get home, my husband making me a pre-dinner omlette a number of times because he's sweet and loving.

Today's full meal plans (yes, I'm counting the yogurt as a full breakfast!) was one of the few I've had at the office for about 2 months!  And it's actually pretty nice.  Granted, there's an awful lot of protein, but that's fine.

I do want to lose weight, but not by starving my body.  Nutrition is very important right now because I'm nursing my daughter and she's just barely starting on pureed foods, so most of her nutrition is coming from me.  I hope that a number of my physical ailments will subside by doing this (like the migraines and nausea) while also helping with my grumpiness and melancholy.  What is sad, though, is that I've lost interest in food in general.  To alleviate this, I am trying to really start cooking again.  I haven't done more than just roasting and such since the move... so I bought supplies to start making simple Korean banchans (side dishes) and I'll go from there.
Posted by MankyCat at 1:08 AM No comments: Links to this post 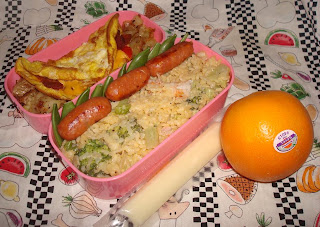 Snack - String cheese and an orange

All were tasty, especially the breakfast tier.  Will be making the omlette and potatoes again.  :-)
The orange was the only survivor in this meal, having been brought home unconsumed.
Posted by MankyCat at 12:32 PM No comments: Links to this post

Last night, my husband and I tried a new version of a chicken dish my mother has cooked a few times for Sunday dinner.  The recipe is called Brown-Sugar BBQ Chicken, and it is delicious.  Even my youngest niece and I tried it and loved it, though we were both avoiding chicken at the time.

My idea was to cut the chicken into nuggets, cover them in batter, and fry them.  Then we would combine the nuggets with the sauce.  Though my husband used a different batter than I intended, the recipe turned out well.  Very tasty!  We had it with sautéed french green beans and homemade french fries.  Delicious! 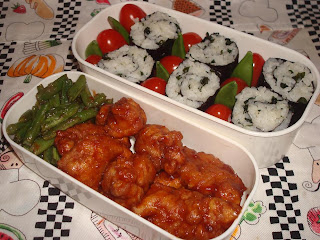 So, today's lunch bento is made up of the following: 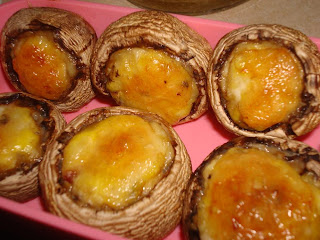 As for my breakfast bento, I made mushroom mini quiches.  I had the idea when I woke up.  We had a bunch of mushrooms I wanted to use up, but also wanted to make stuffed mushrooms.  This fullfilled both needs, in a way.

I removed the stems from the mushrooms and gently scraped out the ribs and placed the caps on a tinfoil lined cookie pan.  Then I placed a small piece of cooked bacon in each mushroom, followed by some shredded Monterey Pepper Jack cheese.  My husband mixed an egg with a little whole milk, and I spooned this mixture into each mushroom cap, making sure to only fill the caps 1/2 to 1/3 full. 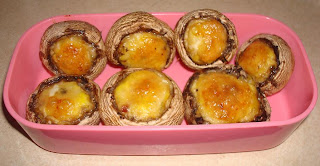 I then put the cookie sheet (with the mushroom caps) into my toaster oven, preheated to 400 degrees.  I baked them until they were done, checking every 5 to 10 minutes.

They turned otu great and my husband also enjoyed them.  Not sure how my son liked them, as I had to leave for work before he woke up.  I definitely plan to make these again, with different variations.
Posted by MankyCat at 12:43 PM 2 comments: Links to this post

MankyCat
I have a lot of interests... too many sometimes. But that's what keeps life interesting.